So the mammogram – or as I like to call it; “getting to second base” is now complete.

With a history of cancer in my family; waiting on these results is nerve-wracking. You can tell yourself a million times over that you are fine, but until you actually hear the words from a professional, you cant help but worry.  And when I worry – I eat.

Getting to the appointment was a feat in itself. We have had some MAJOR storms come through the area so it took me about 45 minutes longer to get there than normal. I had to drive through small rivers of water and I arrived soaked and freezing cold even though it’s over 90 degrees out. 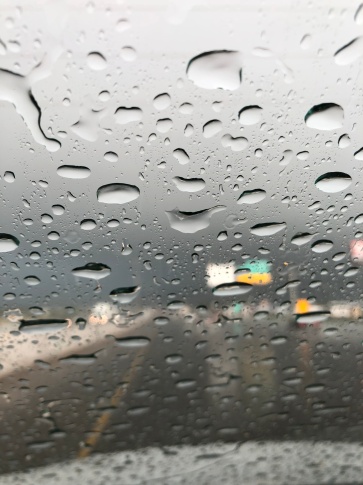 But finally, I made it there – got checked in  (found a dog treat in my purse) and was escorted to a tiny room and told to undress from the waist up.

What is it about us girls that makes us fold up our undergarments ever so neatly even though NO ONE is going to see them yet at home  the bra is taken off and left wherever it lands? And why on earth did I take off my shoes? No idea – but I did – and placed them neatly on top of my even neater folded clothing.

You get to the room and all humility is out the window as you stand there, your boob in her hand, as it’s being placed on a machine then squished so hard you are swear it’s going to burst. You hold your breath, they take the picture, then you do it all over again. Then, of course, the pics are posted on a screen where you have only a minute to quickly glance them over but, in that minute, you swear you see a million things wrong with them – not even mentioning the fact that they are no where even close to being symmetrical even though you paid someone handsomely to MAKE SURE they were..

Anyway, that part is over and now I wait… again…

This site uses Akismet to reduce spam. Learn how your comment data is processed.